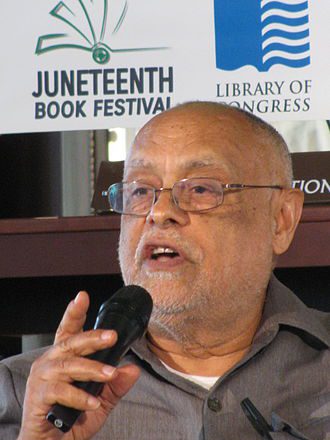 Ethiopian filmmaker
This article is about a person whose name includes a patronymic. The article properly refers to the person by his given name, Haile, and not as Gerima.

Haile Gerima (born March 4, 1946) is an Ethiopian filmmaker who lives and works in the United States. He is a leading member of the L.A. Rebellion film movement, also known as the Los Angeles School of Black Filmmakers.[1] His films have received wide international acclaim. Since 1975, Haile has been an influential film professor at Howard University in Washington, D.C. He is best known for Sankofa (1993), which won numerous international awards.

Haile Gerima was born and raised in Gondar, Ethiopia. Haile is ethnic Amhara.[2] His father was a dramatist and playwright, who traveled across the Ethiopian countryside staging local plays. He was an important early influence. He has discussed the unconscious effect representations of colonialism in film had on him as a child:

...as kids, we tried to act out the things we had seen in the movies. We used to play cowboys and Indians in the mountains around Gondar...We acted out the roles of these heroes, identifying with the cowboys conquering the Indians. We didn't identify with the Indians at all and we never wanted the Indians to win. Even in Tarzan movies, we would become totally galvanized by the activities of the hero and follow the story from his point of view, completely caught up in the structure of the story. Whenever Africans sneaked up behind Tarzan, we would scream our heads off, trying to warn him that 'they' were coming".[3]

Haile emigrated to Chicago. United States in 1967 to study theatre. He enrolled in acting classes at the Goodman School of Drama in Chicago. He met Teshome Gabriel in Maine while teaching Amharic to Peace Corps volunteers.[4] As he stated to Los Angeles Times: "When I was growing up, I wanted to work in theater—it never occurred to me I could be a filmmaker because I was raised on Hollywood movies that pacified me to be subservient. Film making isn't encouraged or supported by the Ethiopian government."[5] He felt limited by theater and was resigned, notes Francoise Pfaff, to "subservient roles in Western plays."

In 1970, he moved to California to attend the University of California where he earned Bachelor's and Master's of Fine Arts degrees in film.[6] He was part of a generation of new black filmmakers who became known as the Los Angeles School of Black filmmakers, along with Charles Burnett (Killer of Sheep), Jamaa Fanaka (Penitentiary), Ben Caldwell (I and I), Larry Clark and Julie Dash (Daughters of the Dust).[1]

Haile's 1976 Bush Mama is the story of Dorothy and her husband T.C., a discharged Vietnam veteran who anticipated a hero's welcome on his return. He is arrested and imprisoned for a crime he did not commit. Theirs is a world of welfare, perennial unemployment, and despair. It addresses issues of institutionalized racism, police brutality, and poverty; themes that remain pertinent today.

For the production of Mirt Sost Shi Amit (Harvest: 3,000 Years)[8] Haile returned to his native Ethiopia. It is an account of a poor peasant family who eke out an existence within a brutal, exploitative, and feudal system of labor.

His film Wilmington 10 – U.S.A. 10,000 (1978) explores racism and the shortcomings of the criminal justice system in the United States by examining the history of the nine black men and one white woman who became known as the Wilmington Ten.

Haile met his future wife and a Detroit native, Shirikiana Aina while she was attending at Howard University. They were married during her time at UCLA.[9]

The travails of black urban life in the United States are explored in the two-hour Ashes and Embers (1982), the story of a moody and disillusioned black veteran of the Vietnam War.[10] Haile discusses his movie Ashes and Embers in an interview, "presented in collaboration with ARRAY, the rebirth of the African American Film Festival Releasing Movement (AFFRM)"[11] at the Schomburg Center. He states that Hollywood has produced an "Anglo-Saxon dictatorship and culture housed in the mainstream cinema [that] dictates."[11] Which he responds "with responsibility [the filmmakers] have to the language of cinema because [their] language, [their] accent has to come into cinema. [In] African cinema this accent is local Senega, Burkina Faso etc.[11]"

Haile made these films to honor the struggles of his ancestors and to make names known throughout history.[12] Haile's films show the concept of identity and independence.[12] He wanted to use his work as a critical lens for personal growth and creative development.[12]

After Winter: Sterling Brown (1985) is a documentary about the notable black American poet.

Haile is perhaps best known as the writer, producer, and director of Sankofa (1993). This dramatic tale of African resistance to slavery won international acclaim: awarded first prize at the African Film Festival in Milan, Italy; Best Cinematography at Africa's premier Panafrican Film and Television Festival of Ouagadougou (FESPACO); and nominated for the Golden Bear at the 43rd Berlin International Film Festival.[13]

The film presents a brutally realistic portrayal of African slavery. The story is revealed through the eyes of Mona, a modern-day woman who is possessed by spirits and transported to the past as Shola, a house slave on the Lafayette plantation in Louisiana. The savagery and violence of the evil institution are clearly disturbing and go far beyond the safe and conventional images of slavery presented by Hollywood. Some critics panned Haile for excess brutality, but the black community responded positively and enthusiastically. The film was well received and played to full houses for many weeks in major cities.

Imperfect Journey (1994), commissioned by the BBC, explores the political and psychic recovery of the Ethiopian people after the political repression or "red terror" of the military junta of Mengistu Haile Mariam. The filmmaker suggests questions about the direction of the succeeding government and the will of the people in creating institutions guaranteeing their liberation.

Adwa: An African Victory (1999) is a documentary drama of the history of the 1896 battle, which concluded the war in which the Ethiopian people united to defeat the Italian army.

Haile's most recent film is Teza (2008). Set in Ethiopia and Germany, the film chronicles the return of an Ethiopian intellectual to his country of birth during the repressive Marxist regime of Mengistu Haile Mariam and the recognition of his own displacement and powerlessness at the dissolution of his people's humanity and social values. After several years spent studying medicine in Germany, Anberber returns to Ethiopia only to find the country of his youth replaced by turmoil. His dream of using his craft to improve the health of Ethiopians is squashed by a military junta that uses scientists for their own political ends. Seeking the comfort of his countryside home, Anberber finds no refuge from violence. The solace that the memories of his youth provide is quickly replaced by the competing forces of military and rebelling factions. Anberber needs to decide whether he wants to bear the strain or piece together a life from the fragments that lie around him.

He founded Sankofa, a bookstore, cafe and film center, located at 2714 Georgia Avenue NW, Washington, D.C. It is directly across the street from Howard University. To gain more independence, Haile and his wife Sirikiana Aina (who is also a filmmaker) in 1984 established Mypheduh Films Inc., a distribution company for low-budget, independent films. They relied on this for his film Sankofa.

Over the course of his career, Haile has received numerous awards and distinctions at film festivals.