Ronald Wayne Burkle (born November 12, 1952) is an American businessman. He is the co-founder and managing partner of The Yucaipa Companies, LLC, a private investment firm that specializes in U.S. companies in the distribution, logistics, food, retail, consumer, hospitality, entertainment, sports, and light industrial sectors.[3][4]

Yucaipa has executed grocery-chain mergers and acquisitions involving supermarket chains including Fred Meyer, Ralphs, and Jurgensen's, and once owned stakes in about 35 companies, including the grocery chains A&P and Whole Foods Market, before their respective demise and takeover.[5]

Burkle is a prominent Democratic activist and fundraiser.[6][7][8]

Ron Burkle was born on November 12, 1952, the elder of two sons, to Betty and Joseph Burkle in Pomona, California.[1] Joseph worked seven days a week, managing a Stater Bros. grocery store in Pomona and investing his savings in apartment buildings.[1][9][10] To see his father, Burkle stocked shelves in his father's store with bread and corralled shopping carts.[1][11]

At age 21, he married Janet Steeper, a Stater Bros. clerk and great-grandniece of the aviation pioneers, the Wright brothers.[1] They had three children together. Burkle parlayed a $3,000 investment in American Silver and another metals company into $30,000 and began investing in and flipping undervalued grocery stores. He made at least one deal with the assistance of junk bond financier Michael Milken.[1][10]

Burkle was promoted to store manager at Stater Bros. and later became a vice president at Petrolane, Inc., Stater's parent company. When he was 29, Petrolane decided to sell Stater Bros.[1] Burkle secretly organized a leveraged buyout with Charles Munger, vice-chairman of Berkshire Hathaway, who agreed to put up half of the equity.[1][11] Burkle made his bid to Petrolane's board that was 20% lower than Petrolane's internal valuation. The board rejected Burkle's offer and fired him. Burkle's portfolio was by then worth some $5 million, and during the next five years, he continued to invest in stocks and oversaw his family's rental properties.[1][11]

During the 1992 Los Angeles riots, Burkle refused to close his inner-city stores, a move for which he received praise.[14]

He has served as chairman of the board and controlling shareholder of numerous companies, including Alliance Entertainment,[15] Golden State Foods, Dominick's, Fred Meyer, Ralphs, and Food4Less. He is currently a member of the board of Occidental Petroleum Corporation,[16] KB Home, and Yahoo![17]

Burkle is often seen as a businessman who maintains close relationships with labor unions and works with unions to solve business problems.[14][18] 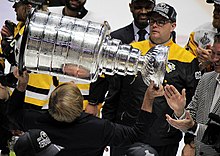 Co-owner Mario Lemieux looks on as Burkle kisses the Stanley Cup in 2017.

Burkle is part owner of the Pittsburgh Penguins of the National Hockey League, although his stake in the team is unknown.[19][20][21] In 1999, he helped save the team by partnering with former Penguin Mario Lemieux to bring the team out of bankruptcy.[22]

Burkle played an active part in negotiations to construct the PPG Paints Arena for the Penguins.[22]

Burkle's strong ties to union work also led him to be one of the owners helping Commissioner Gary Bettman negotiate an end to the 2012–13 NHL lockout.[23][24][25]

The Penguins, under the ownership of Burkle, are the only North American sports team with ties to private equity that has won a championship.[26]

On January 22, 2019, Burkle was announced as the new lead investor of soon-to-be Major League Soccer franchise, the Sacramento Republic FC.[27]

On February 26, 2021, Burkle announced that he was pulling out his interests in Major League Soccer expansion club in Sacramento due to the COVID-19 pandemic in California. This move placed Sacramento expansion hopes in doubt.[28]

In 2020, Burkle made a major investment in the musical festival production Danny Wimmer Presents.[43]

In 2019, Burkle sold a 50% stake in the Sydell Group to MGM Resorts International. He maintains ownership stakes in a number of other hotel properties.[48]

Burkle's investments and transactions include:

Burkle has personally contributed millions of dollars to the Democratic Party and raised an estimated $100 million at celebrity-studded fundraising events he hosted for Democratic Party candidates at his Green Acres Estate in Beverly Hills, California.[69][70] Burkle has hosted fundraisers for Bill and Hillary Clinton,[69][71] John Kerry,[6] Cory Booker,[7] and Terry McAuliffe,[72] as well as former Republican California Governor Arnold Schwarzenegger,[1] among others.

In January 2011, he hosted a fundraiser to support efforts to overturn Proposition 8, California's ban on same-sex marriage.[73]

In 2004, Burkle helped finance the launch of Al Gore's Current TV,[74] which was sold in January 2013 to Qatar-based cable news channel Al Jazeera.[75]

During Bill Clinton's presidency, Burkle was a key fundraiser and they became close friends.[8] In 2002, Burkle hired Clinton as a senior advisor on two Yucaipa domestic investment funds.[76] Clinton invested in a Yucaipa global fund focused on foreign companies.[76] In an interview with The Wall Street Journal, then-U.S. Senator Hillary Clinton (D-NY) expressed concern that such investments could be used by foreign governments as "instruments of foreign policy."[76]

In 2009, Bill Clinton ended his relationship with Yucaipa due to potential conflicts of interest.[8] Following "months" of negotiations, the two were not able to agree on a final payment for Clinton's advisory services, estimated at up to $20 million, and Clinton "walked away" from the potential payout.[77][78]

In 1997, Burkle donated $15 million for the construction of Walt Disney Concert Hall.[84]

Burkle is founder and chairman of The Ronald W. Burkle Foundation.[4] The foundation's stated mission is to "positively influence people around the world and their communities" by supporting programs that "strengthen international understanding, foster worker's rights, empower underserved communities, nurture the arts and architecture, engage children in learning and advance scientific research."[85]

Burkle serves as co-chairman of The Ronald W. Burkle Center for International Relations at UCLA, to promote "research on and promotes discussion of international relations, U.S. foreign policy, and complex issues of global cooperation and conflict."[86][87] The Center has hosted UN Secretary-General Ban Ki-moon, and former U.S. presidents Bill Clinton and Jimmy Carter.[87]

Burkle is a trustee of The Scripps Research Institute, The Carter Center,[4][88] the National Urban League,[4][88] Frank Lloyd Wright Building Conservancy[89] and AIDS Project Los Angeles.[90] He is a past board member of the J. Paul Getty Trust,[91][92] the Los Angeles County Museum of Art,[93] the Los Angeles Music Center,[94] John F. Kennedy Center for Performing Arts,[95] and the Museum of Contemporary Art, Los Angeles.[92]

Burkle hosts fundraising events for the non-profit Share Our Strength and its No Kid Hungry campaign, which focuses on helping end childhood hunger in the United States.[96]

Burkle also hosts events for The Rape Foundation at his Greenacres Estate.[97][98]

Burkle is a fan of historic architecture. In 2011, he purchased[99] the partially restored Ennis House, a Los Angeles landmark designed by Frank Lloyd Wright. In 2019, Burkle sold the house for $18 million.[100] Burkle owns Greenacres, an estate built for Harold Lloyd. Burkle owns two of entertainer Bob Hope's properties, acquiring his John Lautner-designed Palm Springs home for $13 million in 2016 and Toluca Lake, CA home, originally designed by Richard Finkelhor in the 1930s and expanded in the 1950s by John Elgin Woolf, for $15 million in 2017.[101]

Burkle owns the Mediterranean-styled mansion overlooking the bluffs of Black's Beach on a nearly six-acre plot in the La Jolla Farms neighborhood of San Diego, California. It was purchased on February 5, 1999, for $15.3 million and the current tax assessment is $34 million.[105]

Burkle has worked with Novak Djokovic, world No.1 tennis player at the time, on strategic marketing and charitable initiatives.[106]

In December 2018, the Serbian Government opened a consulate in Montana and Burkle was named honorary consul of Serbia in the US. On account of that, he applied for Serbian citizenship, which Serbian Government accepted and he was formally naturalized on November 25, 2019[citation needed], making him the third Serbian billionaire after Philip Zepter and Miroslav Mišković, according to Forbes' list.[verification needed]

In April 2006, Burkle accused New York Post columnist Jared Paul Stern of attempting to extort money from him in exchange for stopping the publication of stories in Page Six, the paper's gossip column, about his private life. He secretly videotaped two private meetings between himself and Stern, with the second meeting orchestrated and monitored by the FBI. Stern allegedly asked Burkle for a $220,000 investment in his clothing business in exchange for better coverage. Stern was subsequently fired by the Post.[110]

On April 30, 2008, a Delaware judge dismissed Burkle's lawsuit against Raffaello Follieri, ex-boyfriend of actress Anne Hathaway, after Follieri agreed to repay $1.3 million Burkle loaned to him in the Vati-Con scandal.[111] In 2018, Follieri, who was deported back to Italy in 2012 after serving 4+1⁄2 years in prison for the scandal, stated that he and Burkle were once again on good terms and that Burkle was among the group of investors helping him acquire 50 percent in the Foggia Calcio soccer club in Southern Italy.[112] Burkle’s lawyer, Tom Harvey, denied this to Page Six on January 3, 2018, saying: “Ron is not involved with Follieri. He’s not involved with the Foggia team. Follieri is just making this stuff up. There is absolutely zero chance that Ron would invest with Follieri, directly or indirectly.”[113]

Ronald Burkle name was found in Jeffrey Epstein’s black book and on Epstein’s private jet log. Burkle took what were described as humanitarian trips to Africa with Bill Clinton on Epstein’s private Boeing 727, the Lolita Express. Following the Africa trip, Burkle reportedly returned home via a commercial jet, referring to Epstein as "creepy".[114][115][116]