Pearl Mae Bailey (March 29, 1918 – August 17, 1990) was an American actress and singer.[1] After appearing in vaudeville, she made her Broadway debut in St. Louis Woman in 1946.[2] She received a Special Tony Award for the title role in the all-black production of Hello, Dolly! in 1968. In 1986, she won a Daytime Emmy award for her performance as a fairy godmother in the ABC Afterschool Special Cindy Eller: A Modern Fairy Tale. Her rendition of "Takes Two to Tango" hit the top ten in 1952.

In 1976, she became the first African-American to receive the Screen Actors Guild Life Achievement Award. She received the Presidential Medal of Freedom on October 17, 1988.

Bailey was born in Newport News, Virginia[1] to the Reverend Joseph James and Ella Mae Ricks Bailey.[3] She was raised in the Bloodfields neighborhood of Newport News and graduated from Booker T. Washington High School in nearby Norfolk, the first city in the region to offer higher education for black students. Blues singer Ruth Brown was one of her classmates.

Bailey made her stage-singing debut at the age of 15. Her brother Bill Bailey was beginning his own career as a tap dancer and suggested that she enter an amateur contest at the Pearl Theatre in Philadelphia. Bailey won and was offered $35 a week to perform there for two weeks. However, the theater closed during her engagement and she was not paid.[3] She later won a similar competition at Harlem's famous Apollo Theater and decided to pursue a career in entertainment. 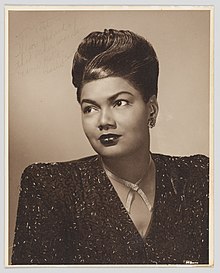 Bailey began by singing and dancing in Philadelphia's black nightclubs in the 1930s, and soon started performing in other parts of the East Coast. In 1941, during World War II, Bailey toured the country with the USO, performing for American troops. After the tour, she settled in New York. Her solo successes as a nightclub performer were followed by acts with entertainers such as Cab Calloway and Duke Ellington. In 1946, Bailey made her Broadway debut in St. Louis Woman. For her performance, she won a Donaldson Award as the best Broadway newcomer. Bailey continued to tour and record albums along with her stage and screen performances. Early in the television medium, Bailey guest starred on CBS's Faye Emerson's Wonderful Town.

Bailey, costumed in the role of Butterfly, gauges the applause following her performance of the song "It's a Woman's Prerogative" on July 5, 1946. Sustained applause required her to take another bow.

In 1967, Bailey and Cab Calloway headlined an all-black cast version of Hello, Dolly! The touring version was so successful that producer David Merrick took it to Broadway, where it played to sold-out houses and revitalized the long-running musical. Bailey was given a special Tony Award for her role, and RCA Victor released a second original-cast album, the only recording of the score to have an overture written especially for the recording. 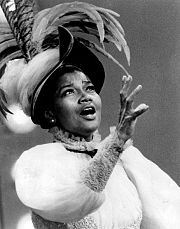 Bailey on The Ed Sullivan Show performing "Before the Parade Passes By" during her run in Hello, Dolly! on Broadway (1968)

Bailey hosted her own variety series on ABC, The Pearl Bailey Show (January – May 1971), which featured many notable guests, including Lucille Ball, Bing Crosby and Louis Armstrong (one of his last appearances before his death).[5]

Following her 1971 television series, she provided voices for animations such as Tubby the Tuba (1976) and Disney's The Fox and the Hound (1981). She returned to Broadway in 1975, playing the lead in an all-black production of Hello, Dolly!. In October 1975, she was invited by Betty Ford to sing for Egyptian president Anwar Sadat at a White House state dinner as part of Mideast peace initiative.[6]

She earned a degree in theology from Georgetown University in Washington, D.C. in 1985 at age 67. At Georgetown, she was a student of the philosopher Wilfrid Desan.

Later in her career, Bailey was a fixture as a spokesperson in a series of Duncan Hines commercials, singing "Bill Bailey (Won't You Come Home)." She also appeared in commercials for Jell-O,[7] Westinghouse[8] and Paramount Chicken.

In her later years, Bailey wrote several books: The Raw Pearl (1968), Talking to Myself (1971), Pearl's Kitchen (1973) and Hurry Up America and Spit (1976). In 1975, she was appointed special ambassador to the United Nations by President Gerald Ford. Her last book, Between You and Me (1989), details her experiences with higher education. On January 19, 1985, she appeared on a nationally televised broadcast gala the night before the second inauguration of Ronald Reagan. In 1988, Bailey received the Presidential Medal of Freedom from President Reagan.[citation needed]

Bailey went through a number of failed marriages in her earlier adult years. She married John Randolph Pinkett, either her third or fourth husband, when she was 30 years old, and divorced him four years later, accusing him of physical abuse.[9][10]

On November 19, 1952, Bailey married jazz drummer Louie Bellson in London. They remained married until her death nearly 38 years later in 1990. Bellson was six years Bailey's junior and white. Interracial couples were rare at that time, and Bellson's father was reportedly opposed to the marriage because of Bailey's race.[10]

Bailey, a Republican, was appointed by President Richard Nixon as the nation's "Ambassador of Love" in 1970. She attended several meetings of the United Nations and later appeared in a campaign ad for President Gerald Ford in the 1976 election.[11]

She was awarded the Bronze Medallion in 1968, the highest award conferred upon civilians by New York City.

Bailey was a close friend of actress Joan Crawford.[12] In 1969, Crawford and Bailey joined fellow friend Gypsy Rose Lee in accepting a USO award. That same year, Bailey was recognized as USO's woman of the year.[13][14] Upon Crawford's death in May 1977, Bailey spoke of Crawford as her sister and sang a hymn at her funeral.[12][15] American socialite Perle Mesta was another of Bailey's close friends.[16] In the waning days of Mesta's life, Bailey visited Mesta frequently and sang hymns for her.[17][18]

Bailey died at Thomas Jefferson University Hospital in Philadelphia on August 17, 1990. Following an autopsy, the cause of death was determined to be arteriosclerosis, with significant narrowing of the coronary artery. Bailey is buried at Rolling Green Memorial Park in West Chester, Pennsylvania.

The 1969 song "We Got More Soul" by Dyke and the Blazers includes Bailey in its roster of icons.[20]

A dress owned by Bailey is at the National Museum of African American History and Culture.[21] 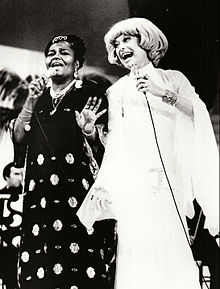 With Carol Channing on a TV special One More Time (1974)