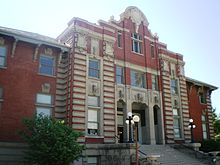 On July 9, 2010, the Board of Supervisors approved the appointment of Mark A. Fajardo, the Chief Forensic Pathologist at Riverside County, as the new Medical Examiner-Coroner, at an annual salary of $275,000.[2] He formally replaced Lakshmanan Sathyavagiswaran, who served 2 years as the Coroner, in August 2013.[3]

Dr. Mark Fajardo resigned in March 2016. A news report indicated that "he left because it became common to have up to 50 bodies waiting to be processed and the backlog of bodies was 'nuts'. ... and toxicology tests were taking six months to complete" due to inadequate staffing.[4]

Lakshmanan Sathyavagiswaran was re-appointed, but as interim coroner, on April 11, 2016. As of December 30, 2016, the position of Chief Medical Examiner-Coroner had not been permanently filled. A search process had been initiated by the county, with Ralph Andersen & Associates working "to develop a customized recruitment brochure for this position".[5]

Dr. Jonathan R. Lucas was appointed as the Chief Medical Examiner-Coroner on July 10, 2017.