listen); born Klaus Georg Steng; 22 June 1943) is an Austrian actor and director. He is also a professor at the Max Reinhardt Seminar.

Brandauer is known internationally for his roles in The Russia House (1990), Mephisto (1981), Never Say Never Again (1983), Out of Africa (1985), Hanussen (1988), Burning Secret (1988), and White Fang (1991). For his supporting role as Bror von Blixen-Finecke in the drama film Out of Africa (1985), Brandauer was nominated for an Academy Award and won a Golden Globe Award. He has also appeared as King Nebuchadnezzar II in 1998, in Time Life’s Jeremiah, from The Bible Collection: The Old Testament.

Brandauer has at least a working knowledge of five languages: German, Italian, Hungarian, English and French and has acted in each.

Brandauer was born as Klaus Georg Steng in Bad Aussee, Austria.[3] He is the son of Maria Brandauer and Georg Steng (or Stenj), a civil servant.[4] He subsequently took his mother's first name as part of his professional name, Klaus Maria Brandauer. 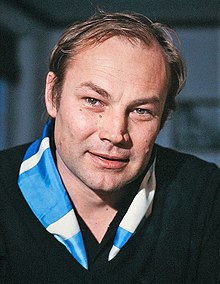 Brandauer began acting on stage in 1962. After working in national theatre and television, he made his film debut in English in 1972, in The Salzburg Connection. In 1975 he played in Derrick – in Season 2, Episode 8 called "Pfandhaus". His starring and award-winning role in István Szabó's Mephisto (1981) playing a self-absorbed actor, launched his international career. (He would later act in Szabó's Oberst Redl (1985).)

Following his role in Mephisto, Brandauer appeared as Maximillian Largo in Never Say Never Again (1983), a remake of the 1965 James Bond film Thunderball. Roger Ebert said of his performance: "For one thing, there's more of a human element in the movie, and it comes from Klaus Maria Brandauer, as Largo. Brandauer is a wonderful actor, and he chooses not to play the villain as a cliché. Instead, he brings a certain poignancy and charm to Largo, and since Connery always has been a particularly human James Bond, the emotional stakes are more convincing this time."[6] He starred in Out of Africa (1985), opposite Meryl Streep and Robert Redford. Brandauer was nominated for an Oscar and won a Golden Globe for the performance.

In 1987, he was the Head of the Jury at the 37th Berlin International Film Festival.[7] In 1988 he appeared in Hanussen opposite Erland Josephson and Ildikó Bánsági. Brandauer was originally cast as Marko Ramius in The Hunt for Red October. That role eventually went to Sean Connery, who played James Bond to Brandauer's Largo in Never Say Never Again. He co-starred with Connery again in The Russia House (1990). His other film roles have been in The Lightship (1986), Streets of Gold (1986), Burning Secret (1988), White Fang (1991), Becoming Colette [fr] (1991), Introducing Dorothy Dandridge (1999, as director Otto Preminger), and Everyman's Feast (2002). In 1989 he participated in the great production film for the bicentennial of the French Revolution by the French television channel TF1, La Révolution française: He played the role of Georges Danton.

Brandauer first work as movie director was, in 1989, Seven Minutes [de], with himself in the title role.

In August 2006, Brandauer's much-awaited production of The Threepenny Opera gained a mixed reception. Brandauer had resisted questions about how his production of Bertolt Brecht and Kurt Weill's classic musical comedy about the criminal MacHeath would differ from earlier versions, and his production featured Mack the Knife in a three-piece suit and white gloves, stuck to Brecht's text, and avoided any references to contemporary politics or issues.[citation needed]