American cemetery and museum in California

Forest Lawn Memorial Park was founded in 1906 as a not-for-profit cemetery by a group of businessmen from San Francisco. Dr. Hubert Eaton and C. B. Sims entered into a sales contract with the cemetery in 1912, and Eaton took over its management in 1917. Although Eaton did not start Forest Lawn, he is credited as its "Founder" for his innovations of establishing the "memorial-park plan" (eliminating upright grave markers and bringing in works by established artists) and being the first to open a funeral home on dedicated cemetery grounds. He was a firm believer in a joyous life after death. Convinced that most cemeteries were "unsightly, depressing stoneyards", be pledged to create one that would reflect his optimistic Christian beliefs, "as unlike other cemeteries as sunshine is unlike darkness." He envisioned Forest Lawn as "a great park devoid of misshapen monuments and other signs of earthly death, but filled with towering trees, sweeping lawns, splashing fountains, beautiful statuary, and memorial architecture."[1] A number of plaques stating Eaton's intentions are signed "The Builder." Frederick Llewellyn, Eaton's nephew, became CEO of Forest Lawn in 1966. In 1987 he was succeeded by his son, John Llewellyn, the current chairman.[2]

Most of Forest Lawn's burial sections have evocative names, including Eventide, Babyland (for infants, shaped like a heart), Graceland, Inspiration Slope, Slumberland (for children and adolescents), Sweet Memories, Whispering Pines, Vesperland, Borderland (on the edge of the cemetery), and Dawn of Tomorrow. 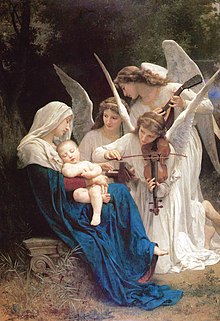 Song of the Angels by William Bouguereau, 1881

The Forest Lawn Museum in Glendale opened in 1952 and is next to the Hall of Crucifixion-Resurrection. It rotates art exhibitions twice yearly, and has hosted solo exhibitions for Henri Matisse, Winslow Homer, Ian Hornak, Francisco Goya, Rembrandt and Marc Davis. In 2021, it held an exhibition on Judson Studios,[4] the oldest family-run stained glass studio in the United States, which produced numerous stained glass windows for Forest Lawn in the Hall of Crucifixion-Resurrection and the Great Mausoleum.

One of the most famous objects in the Forest Lawn Museum's permanent collection is by French artist William Bouguereau (1825-1905), who painted Song of the Angels in 1881. He studied at the Ecole des Beaux Arts in Paris, as well as in Rome, and was considered a leading French academic painter in the nineteenth century. In 2005, Song of the Angels was conserved by the Chief Paint Conservator at the Getty Center, Mark Leonard. It is regarded as one of the most important examples of Bouguereau's work in the United States.

Another important work in the Forest Lawn Museum collection is a replica of Lorenzo Ghiberti's Gates of Paradise. The original doors, which are 17 feet tall and cast in bronze, are part of the Baptistery of St. John in Florence, Italy. Michelangelo is said to have exclaimed: "These doors are worthy to be the gates of Paradise!" The doors feature ten panels that start with creation and end with the visit of the Queen of Sheba to Jerusalem a millennia before the birth of Christ. They are meant to be from left to right, top to bottom. The Forest Lawn replica was cast by Professor Bruno Bearzi, who developed an innovative technique to reveal the gold on the centuries-old doors. He then made a cast of the doors for Forest Lawn. These doors, which are occasionally covered, are permanently installed in the Forest Lawn Museum galleries. 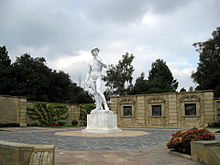 A copy of Michelangelo's David

The six Forest Lawn cemeteries contain about 1,500 statues, about 10% of which are reproductions of famous works of art. Leonardo da Vinci's The Last Supper has been recreated in stained glass in the Memorial Court of Honor at the Glendale location 'in vibrant, glowing and indestructible colors'. There are also a number of full-sized reproductions of other Renaissance sculptures, including Michelangelo's David and Moses. This cemetery is the only place containing a complete collection of replica Michelangelo sculptures,[citation needed] which were made from castings taken from the originals and use marble sourced from the original quarries in Carrara, Italy.

Some of the inspiration at Forest Lawn Glendale is patriotic rather than pious, such as the Court of Freedom, with its large mosaic of John Trumbull's Declaration of Independence and a 13-foot (4.0 m)-tall statue of George Washington. On display in the "Hall of the Crucifixion" is the panoramic painting by the Polish artist Jan Styka titled The Crucifixion. It is the largest permanently mounted religious painting in the world, measuring 195 feet (59 m) in length by 45 feet (14 m) in height. The main gates of Forest Lawn Glendale are claimed to be the world's largest wrought iron gates.[5] 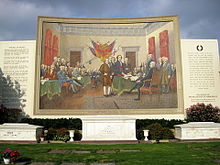 Forest Lawn Glendale has three non-denominational chapels: "The Little Church of the Flowers", "The Wee Kirk o' the Heather" and "The Church of the Recessional", which are all exact replicas of famous European churches. Over 60,000 people have been married here, including Ronald Reagan and Jane Wyman.

More than 335,000 people are buried at Forest Lawn Glendale, and over a million people visit it each year.

Forest Lawn's 300 acres (120 ha) of intensely landscaped grounds and thematic sculptures were the inspiration for the biting commentary of Evelyn Waugh's 1948 satirical novel The Loved One and Jessica Mitford's acerbic 1963 The American Way of Death. Many commentators have considered Forest Lawn to be a unique American creation, and perhaps a uniquely maudlin Los Angeles creation, with its "Disneyland-type theme park" approach to death.

The Great Mausoleum features eleven terraces and over 100 stained glass windows. The massive building, which contains the same amount of steel and concrete as a 70-story skyscraper, embodies an eclectic mix of architectural styles, and is the park's artistic centerpiece.

The mausoleum's original architect was T. Paterson Ross. Numerous other people worked on it, and the construction designs underwent several rounds of changes. Construction began in 1917, and it was officially inaugurated in 1920. Construction finished only in the 1970s.

The Memorial Terrace was added in the late 1920s, and the Memorial Court of Honor was inaugurated in 1931. The gallery's largest piece is the Last Supper stained glass window by Rosa Caselli-Moretti and her sister, Cecilia Caselli- Moretti. This monumental project took over six years to complete. It was created in the sisters’ studio in Perugia, Italy, and shipped to Glendale, where it was formally dedicated on April 28, 1931. Commissioned expressly for the Memorial Court of Honor are the replicas of the seven Michelangelo sculptures including the Pietà. One of the mausoleum's last building phases incorporated French Gothic architecture with lofty ceilings and large stained-glass windows, creating an ethereal and tranquil space.