Ingestion or application of a drug in quantities greater than recommended or generally practiced
"Overdose" redirects here. For other uses, see Overdose (disambiguation).
Medical condition

A drug overdose (overdose or OD) is the ingestion or application of a drug or other substance in quantities greater than are recommended.[1][2] Typically it is used for cases when a risk to health will potentially result.[1] An overdose may result in a toxic state or death.[2]

Timeline of US drug overdose death rates by race and ethnicity.[3] Rate per 100,000 population.

The word "overdose" implies that there is a common safe dosage and usage for the drug; therefore, the term is commonly applied only to drugs, not poisons, even though many poisons as well are harmless at a low enough dosage. Drug overdose is sometimes used as a means to commit suicide, as the result of intentional or unintentional misuse of medication. Intentional misuse leading to overdose can include using prescribed or non-prescribed drugs in excessive quantities in an attempt to produce euphoria.

Usage of illicit drugs, in large quantities, or after a period of drug abstinence can also induce overdose. Cocaine users who inject intravenously can easily overdose accidentally, as the margin between a pleasurable drug sensation and an overdose is small.[4] Unintentional misuse can include errors in dosage caused by failure to read or understand product labels. Accidental overdoses may also be the result of over-prescription, failure to recognize a drug's active ingredient or unwitting ingestion by children.[5] A common unintentional overdose in young children involves multi-vitamins containing iron.

The term 'overdose' is often misused as a descriptor for adverse drug reactions or negative drug interactions due to mixing multiple drugs simultaneously.

Signs and symptoms of an overdose vary depending on the drug or exposure to toxins. The symptoms can often be divided into differing toxidromes. This can help one determine what class of drug or toxin is causing the difficulties.

The drugs or toxins that are most frequently involved in overdose and death (grouped by ICD-10):

The substance that has been taken may often be determined by asking the person. However, if they will not, or cannot, due to an altered level of consciousness, provide this information, a search of the home or questioning of friends and family may be helpful.

Examination for toxidromes, drug testing, or laboratory test may be helpful. Other laboratory test such as glucose, urea and electrolytes, paracetamol levels and salicylate levels are typically done. Negative drug-drug interactions have sometimes been misdiagnosed as an acute drug overdose, occasionally leading to the assumption of suicide.[8]

The distribution of naloxone to injection drug users and other opioid drug users decreases the risk of death from overdose.[9] The Centers for Disease Control and Prevention (CDC) estimates that U.S. programs for drug users and their caregivers prescribing take-home doses of naloxone and training on its utilization are estimated to have prevented 10,000 opioid overdose deaths.[10] Healthcare institution-based naloxone prescription programs have also helped reduce rates of opioid overdose in the U.S. state of North Carolina, and have been replicated in the U.S. military.[11][12] Nevertheless, scale-up of healthcare-based opioid overdose interventions is limited by providers' insufficient knowledge and negative attitudes towards prescribing take-home naloxone to prevent opioid overdose.[13] Programs training police and fire personnel in opioid overdose response using naloxone have also shown promise in the U.S.[14]

Supervised injection sites (also known as overdose prevention centers) have been used to help prevent drug overdoses by offering opioid reversal medications such as naloxone, medical assistance and treatment options. They also provide clean needles to help prevent the spread of diseases like HIV/AIDS and hepatitis.[15][16][17][18] 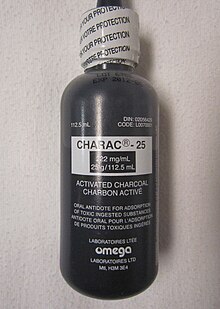 Activated carbon is a commonly used agent for decontamination of the gastrointestinal tract in overdoses.

Stabilization of the victim's airway, breathing, and circulation (ABCs) is the initial treatment of an overdose. Ventilation is considered when there is a low respiratory rate or when blood gases show the person to be hypoxic. Monitoring of the patient should continue before and throughout the treatment process, with particular attention to temperature, pulse, respiratory rate, blood pressure, urine output, electrocardiography (ECG) and O2 saturation.[19] Poison control centers and medical toxicologists are available in many areas to provide guidance in overdoses both to physicians and to the general public.

Specific antidotes are available for certain overdoses. For example, naloxone is the antidote for opiates such as heroin or morphine. Similarly, benzodiazepine overdoses may be effectively reversed with flumazenil. As a nonspecific antidote, activated charcoal is frequently recommended if available within one hour of the ingestion and the ingestion is significant.[20] Gastric lavage, syrup of ipecac, and whole bowel irrigation are rarely used.[20]

In 2008 testimony before a Senate subcommittee, Leonard J. Paulozzi,[26] a medical epidemiologist at the Centers for Disease Control and Prevention said that in 2005 more than 22,000 American lives were lost due to overdoses, and the number is growing rapidly. Paulozzi also testified that all available evidence suggests unintentional overdose deaths are related to the increasing use of prescription drugs, especially opioid painkillers.[27] However, the vast majority of overdoses are also attributable to alcohol. It is very rare for a victim of an overdose to have consumed just one drug. Most overdoses occur when drugs are ingested in combination with alcohol.[28]