Curd Gustav Andreas Gottlieb Franz Jürgens (13 December 1915 – 18 June 1982) was a German-Austrian stage and film actor. He was usually billed in English-speaking films as Curt Jurgens. He was well known for playing Ernst Udet in Des Teufels General. His English-language roles include James Bond villain Karl Stromberg in The Spy Who Loved Me (1977), Éric Carradine in And God Created Woman (1956), and Professor Immanuel Rath in The Blue Angel (1959).

Jürgens was born on 13 December 1915 in the Munich borough of Solln, Kingdom of Bavaria, German Empire. His father, Kurt, was a trader from Hamburg, and his mother, Marie-Albertine, was a French teacher.[1][2] He began his working career as a journalist before becoming an actor at the urging of his actress wife, Louise Basler. He spent much of his early acting career on the stage in Vienna.

Jürgens was critical of National Socialism in his native Germany. In 1944, he was sent to an internment camp in Hungary as a "political unreliable".[3] Jürgens became an Austrian citizen after the war.

Jürgens' first Hollywood film was The Enemy Below (1957), in which he portrayed a German U-boat commander. In 1962, he played the German general Günther Blumentritt in The Longest Day (1962). Later, in the James Bond film The Spy Who Loved Me (1977), he played the villain Karl Stromberg, a sociopathic industrialist seeking to transform the world into an ocean paradise. His last film appearance was as Maître Legraine, beside Alain Delon and Claude Jade in the spy-thriller Teheran 43 (1981). In English-language television, he played Chancellor Otto von Bismarck in several episodes of the BBC series Fall of Eagles (1974) and appeared as General Vladimir in the BBC's Smiley's People (1982). 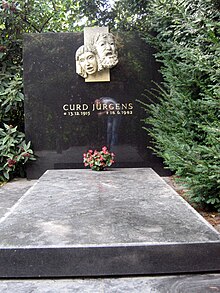 Although he appeared in over 100 films, Jürgens was also a notable stage actor. He was member of several theatres in Vienna (Volkstheater 1938–1941, Burgtheater 1940–1953 and 1965–1968, and others). He played the title role of Hugo von Hofmannsthal's play Jedermann at the Salzburg Festival from 1973 until 1977 – arguably the most high-profile role for a German-speaking male actor. In 1966 he appeared in a short run on Broadway at the Eugene O'Neill Theatre opposite Geraldine Page, directed by George Schaefer.[4]

Jürgens maintained a home in France, but frequently returned to Vienna to perform on stage. He died there from a heart attack on 18 June 1982. Jürgens had suffered a heart attack several years before. During this he had a near-death experience where he claimed he died and went to hell. Jürgens was interred in the Vienna Central Cemetery.

He was 1.92 metres (6 ft 4 in) tall.[7] Brigitte Bardot nicknamed him "the Norman Wardrobe" during their work for Et Dieu... créa la femme.[8] In summer 1957 Jürgens had a short but intense affair with actress Romy Schneider.[9]

Jürgens was married to: