In the film industry, a bankable star is an actor able to be "capable of guaranteeing box-office success simply by showing up in a movie."[1] The bankability of an actor includes their films' box office track record, professional demeanor, and other factors. Hiring a bankable star helps a film company to secure investment, secure distribution, and garner media attention. Some bankable stars have so much star power that even films without a strong concept or "hook", such as a star vehicle film, is feasible to make.

A bankable director is a similar notion. 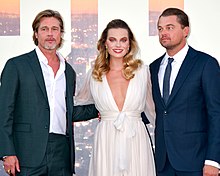 Media consultant Blake Harris[2] states that a bankable star is one of the "3 minimum ingredients to any film package," the other two being a successful director and a script or a strong story idea. The involvement of a bankable star in a film gives investors confidence that they will achieve a return on their investments by ensuring that the film is widely distributed and that at least some people will pay to see it (that it will "open").

Harris adds that obtaining a bankable star for a package is not easy because of the dearth of such stars. He states that at any point in time there are no more than "a dozen or so" stars whose mere involvement will ensure that a film will be made.

Analyst Alex Epstein[3] states that bankable stars or, more generally, "bankable elements" are how "hookless" films (films without a compelling concept that makes people interested in them in their own right) get made. He gives Dances with Wolves as an example of a movie: the involvement of Kevin Costner as the bankable star guaranteed that the movie was made. Writer Melissa Robbie[1] concurs, stating that some movies are high-concept (they have what Epstein terms "hooks"), but others are simply star vehicles for bankable stars.

The Hollywood Reporter has published several results of polls for Hollywood's top ten most bankable stars, the most recent three being one in 1999, one in 2002 and the last one in 2006.[4]

The 2002 survey polled "114 executives at both major studios and independent companies, financiers and various industry players from around the world."[5] Voters were asked which stars "did the most to attract financing to a film, ensure its global distribution, and deliver that hugely important opening weekend based on the strength of their good name."

James Ulmer has compared his list of bankable stars, The Ulmer Scale, to a stock market index. His criteria for ranking is based on the name of a star alone being able to get people to movie theaters in the United States as well as the rest of the world.[6] In an August 2010 interview Ulmer described the international movie market as "unfortunately ... pretty sexist"; how a woman's name alone cannot sell a movie, and how female stars are only bankable when cast with a male star or in ensemble movies.[6]

Lists of most bankable stars

These are the top 10 lists of the most bankable stars, with their scores, as published by The Hollywood Reporter.

The list was created by veteran entertainment journalist James Ulmer, who developed a 100-point method to quantify a star's value to a film production, in terms of getting a movie financed and the cameras rolling. The Ulmer Scale also takes into account an actor's history (box office successes vs. failures), versatility, professional demeanor, and ability and willingness to travel and promote movies.